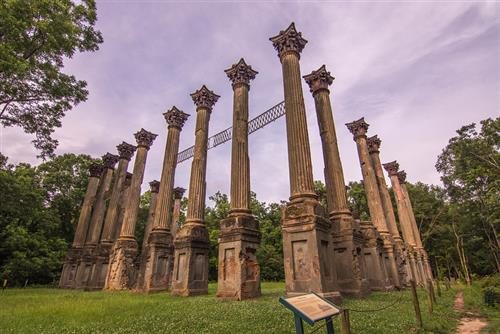 The Windsor Ruins in Port Gibson feature 23 Corinthian columns that are the only remains left of the Windsor plantation mansion. The mansion seemed to be an eerie place from the very beginning. Its owner, Smith Coffee Daniell II, died within just a few weeks of the mansion's 1861 completion. The mansion burned down to the ground three decades later, supposedly after someone dropped a cigarette during a party.

Rumor has it that one of the ghosts lingering at the ruins was was a Union soldier who was killed in the mansion’s doorway during the Civil War. Other reports say that Daniell could be seen in the ruins, along with sounds of a party from long ago.

The Ruins have been featured in the 1957 film “Raintree County" and in the 1996 film “Ghosts of Mississippi."

Disclaimer: Mississippi Haunted Houses does not endorse or support trespassing to visit real haunts. Before you visit ANY local real haunt, make sure to acquire the appropriate permits and/or permissions, and be respectful of privately owned properties. Countless Haunt Hunters have been arrested, ticketed, and reprimanded by the authorities for trespassing. To avoid this, be sure to get in touch with the property owners before visiting a haunt, and respect their hours of operation, local regulations, and rules for visiting at all times. Happy haunting!
All information on this page was submitted to Mississippi Haunted Houses and was believed to be accurate at the time it was posted. Please report any inaccuracies here.